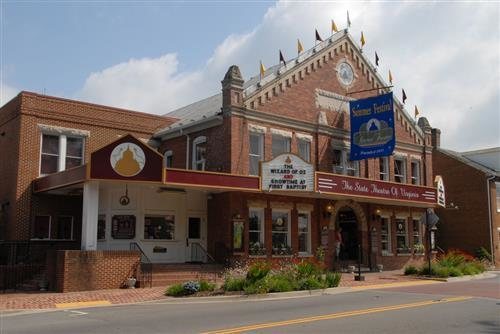 The Barter Theatre has a rather unique origin, having been thought up by local actor, Robert Porterfield, during the Great Depression. On June 10, 1933 the theater opened for its first production, charging 40 cents per ticket. Patrons did not have to pay in cash, however; as the surrounding community was largely a rural farming town and times were tough, Porterfield accepted the equivalent of 40 cents in produce in exchange for admission. Proclaiming that “With vegetables you cannot sell, you can buy a good laugh,” the theater quite literally bartered its craft for local goods; four out of five visitors paid with vegetables, dairy products, or livestock!

The building itself dates back to 1831, and before becoming a theater was used as a Church, a jail, a town hall, and a firehouse. The fire alarm was actually left in the building for a time and actors would have to freeze mid-performance when the alarm sounded, waiting for the noise to stop before they could go on with the show. With its unique history and regular performances Barter continues to attract guests to this day, though not all of them are among the living. Porterfield’s ghost is said to still roam the building and appear in the audience during shows. Another spirit is a bit more malevolent, chasing actors out of their dressing rooms from time to time. A Confederate soldier’s ghost is also said to appear in the theater; it is said that anyone to whom he shows his wound will die within two days.