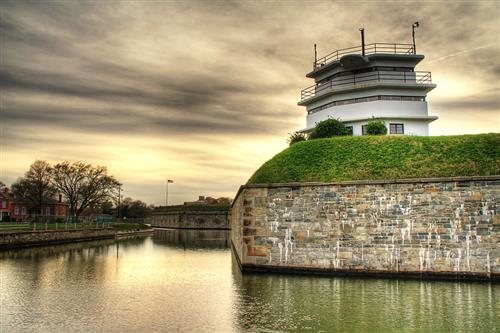 Construction on Fort Monroe finished in 1834, though some form of fortification had existed at the site since 1609 as its location was considered fundamental to the defense of the Chesapeake Bay, Hampton Roads, and more specifically the navigational channel that connected them. During the Civil War the fort was a critical Union stronghold, despite the fact that Virginia was a secessionist state, and played a crucial role in freeing southern slaves which earned it the moniker “Freedom’s Fortress.” On September 15, 2011 Fort Monroe was decommissioned and declared a National Monument by President Obama. It is now open for public visitation.

Those who have gone to the Fort have often come back with reports of strange phenomena. Many apparitions have been spotted at the fort, the most famous of which include Abraham Lincoln and Jefferson Davis, who was imprisoned here after being accused of plotting to assassinate Lincoln. Davis’ ghost walks the ramparts at night and his wife’s spirit is said to reside here as well, marked by a window suddenly starting to vibrate. A ghostly figure in a top hat appears outside the nearby Chamberlin Hotel and is rumored to be Edgar Allan Poe, who ended his brief military career at Fort Monroe.

There are also many less well known, but equally active spirits at the fort. Floating orbs have appeared in photographs, disembodied voices and horse-hoofs have been heard, and a little girl calling for her cat named Greta has been recorded by EVPs. Workers say they have seen a phantom gray cat appear and then disappear around building corners, and there have been sightings a man in mid-18th-century dress standing in front of the dining room fireplace. A Lady in White regularly appears on the boardwalk in a spot now known as Ghost Alley; she is thought to be the wife of a captain who murdered her with a gun after she had an affair.

Share Your Experience or Comments - Fort Monroe
Get More Info