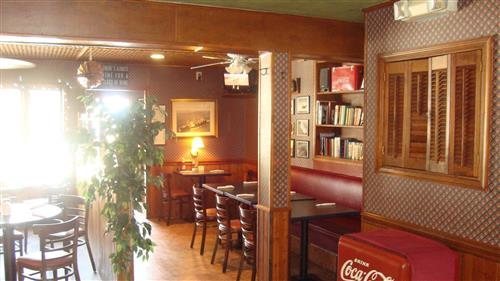 The Occoquan Inn occupies a building constructed in 1810 which has continuously operated as an inn or tavern since early in its history. Today diners can find a variety of delicious dishes at the restaurant, but unwitting visitors may find that they’ve bit off a bit more than they can chew! Local legend has it that the Inn is haunted by the spirit of a Native American who died inside the building.

As more and more natives were forced west by the expansion of US cities and towns, there remained only one Dogue tribesmen in the town of Occoquan. Rumors has it that this Dogue was having an affair with the owner of the inn’s wife, and one night the jealous husband heard the man sneaking down the building’s wooden steps; the husband shot the trespasser before he could reach the ground floor, killing him just as he would have hit the last step. Since then the Dogue tribesman has been haunting the Occoquan Inn, first appearing in the smoke of the fireplace, and later making a habit of appearing in the restaurant every so often. The man has also been seen in the large mirror of the upstairs lady’s washroom, but when the startled women turn around he vanishes. He is described as being tall with long, black hair and a dignified face.

Share Your Experience or Comments - Occoquan Inn
Get More Info