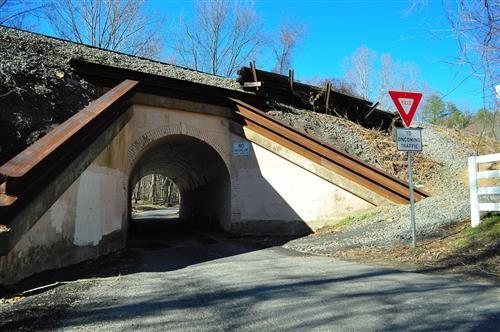 There are various versions of the Bunny Man story for which Bunny Man Bridge is colloquial named. Some accounts revolved around patients escaping from a Clifton asylum prison in 1904, but they have been discredited by the fact that there was neither a prison nor asylum in the area at the time. Another version centers on a man who lived during the 1800s.

According to this account, the man left his family home one day to go hunt for food. When he returned, however, he found the mutilated bodies of his wife and child. Horrified, the man immediately contacted the town sheriff, but because there were no other suspects the sheriff arrested the man who was in turn sent to a mental institution. Maintaining his innocence, the man vowed revenge and sometime later was able to escape the institute and return to Clifton. He began living under a bridge and hunting rabbits for both food and clothing, earning him the moniker “Bunny Man.”

One day after his return several children went missing; the authorities were alerted and immediately went to the Bunny Man’s bridge. When they arrived there they were greeted by the terrible site of dismembered children hanging from the trees; they also saw the Bunny Man being run over by a train. Visitors to the bridge say that you can still hear the Bunny Man’s haunting laughter and see body parts dangling from the trees.